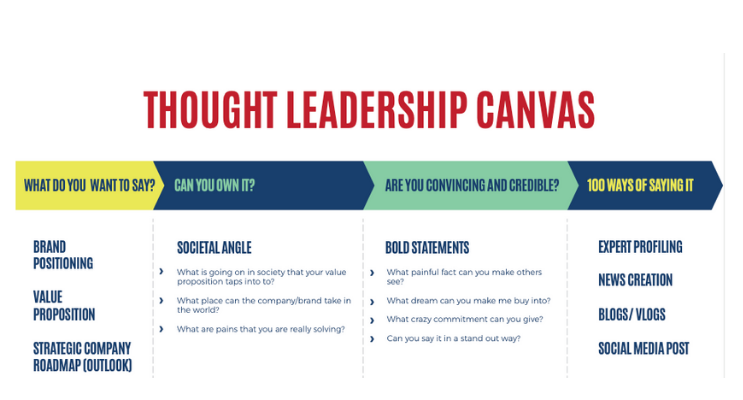 Quite often it happens that a company knocks on the door of, let’s say a PR-agency, to ‘build’ or even ‘create’ thought leadership. It’s a bit like wanting to write a book: many people dream of it, barely anyone actually gets it done and out the door. It takes a while to create then a ton of effort to distribute, absorbing rejection after rejection. It takes proper time, and stamina.

And as with getting books published, thought leadership is not for everyone. Yet there are some paths for getting there. And in this series of blogs, I will sketch some directions.

For twenty years now, I’ve worked on building thought leadership for companies. I dare to say that I know a thing or two about it. And although writing about it is not likely to get me any thought leadership (too narrow an audience) I am sharing my thoughts and experience with you because I believe that companies, organizations, experts who have something interesting to contribute to global knowledge, who can initiate improvement or change or open mindedness, deserve to be heard and seen.

But first things first, what exactly is thought leadership? Wikipedia strikes it as “An individual or firm that is recognized as an authority in a specialized field and whose expertise is sought and often rewarded.”

An authority is not the same as an expert. I know many experts who don’t make themselves seen or heard and they are therefore not thought leaders. A thought leader is someone established media will rely on when they need an expert’s opinion on the subject. The thought leader shares visions, speaks up, lectures students and explains developments in the world in their area.

So expertise is a start point, not the end stage.

Take virology, somehow that was never a big topic with the general public which changed 180 degrees in March 2020. People, media, governments needed guidance through this new and dangerous situation.  Although the number of thought leaders in this field grew exponentially in 2020, the number of experts did not. They’ve studied virology for decades, worked in the field forever and while others were watching Netflix they invested their time in Sars, Mers and Ebola. When these viruses spread, people in the West paid some attention and general virus thought leadership grew, but in 2020 the stage was theirs completely. Even though they never aimed for such a role.

The pandemic creates a good example for the last part of the definition: their expertise is sought. And for expertise to be sought, topicality is needed. Topicality and relevance go hand in hand and relevance is the leader of the duo. Relevance is about how many people are affected and therefore interested in this. That is why B2B topics only really take off when there is a consumer (wider audience) implication.

We have thought leaders on climate change, racism, start-ups, gender equality, mental health in general, on data, privacy, creating habits, fitness and building muscle, happiness, online safety, sustainability, many political topics, the ocean and many, many more. On each of these subjects, you probably think of a person or company who you trust when they speak about the related topics. They have spoken to you with expertise when you were looking for it.

To understand thought leadership it is good to look at what news is first – as news will always accelerate thought leadership. For news to be news, it needs relevance (who cares), trustworthiness (the source of the news is expertiseful) and topicality (this happens now in the world). And although two dimensions don’t cover the complexity, I think you’ll get the drift. I am very happy to share the methodology with you on email. Just send an email and I’ll send over the Canvas with a manual. Have a look and then decide if thought leadership is for you.